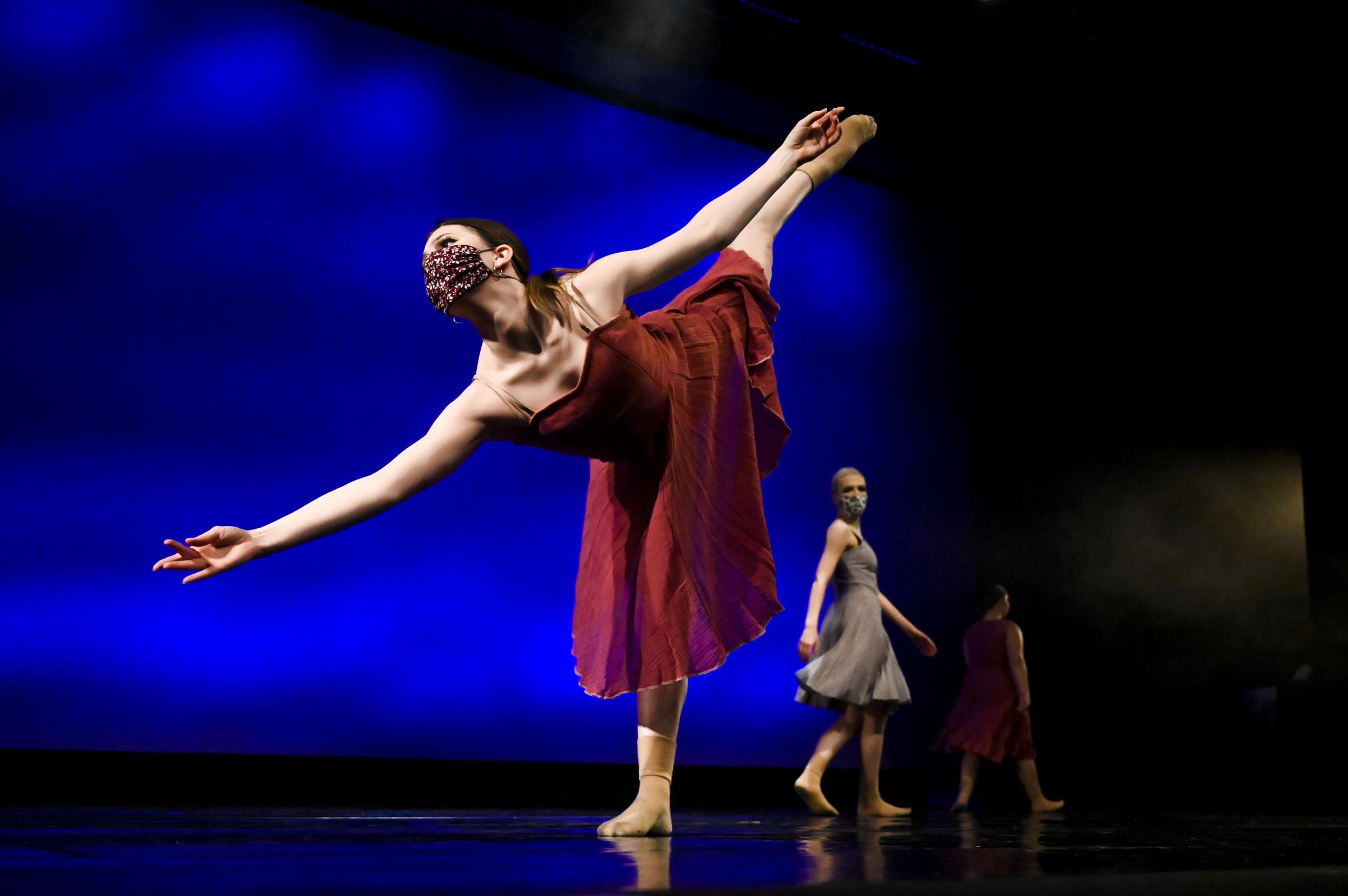 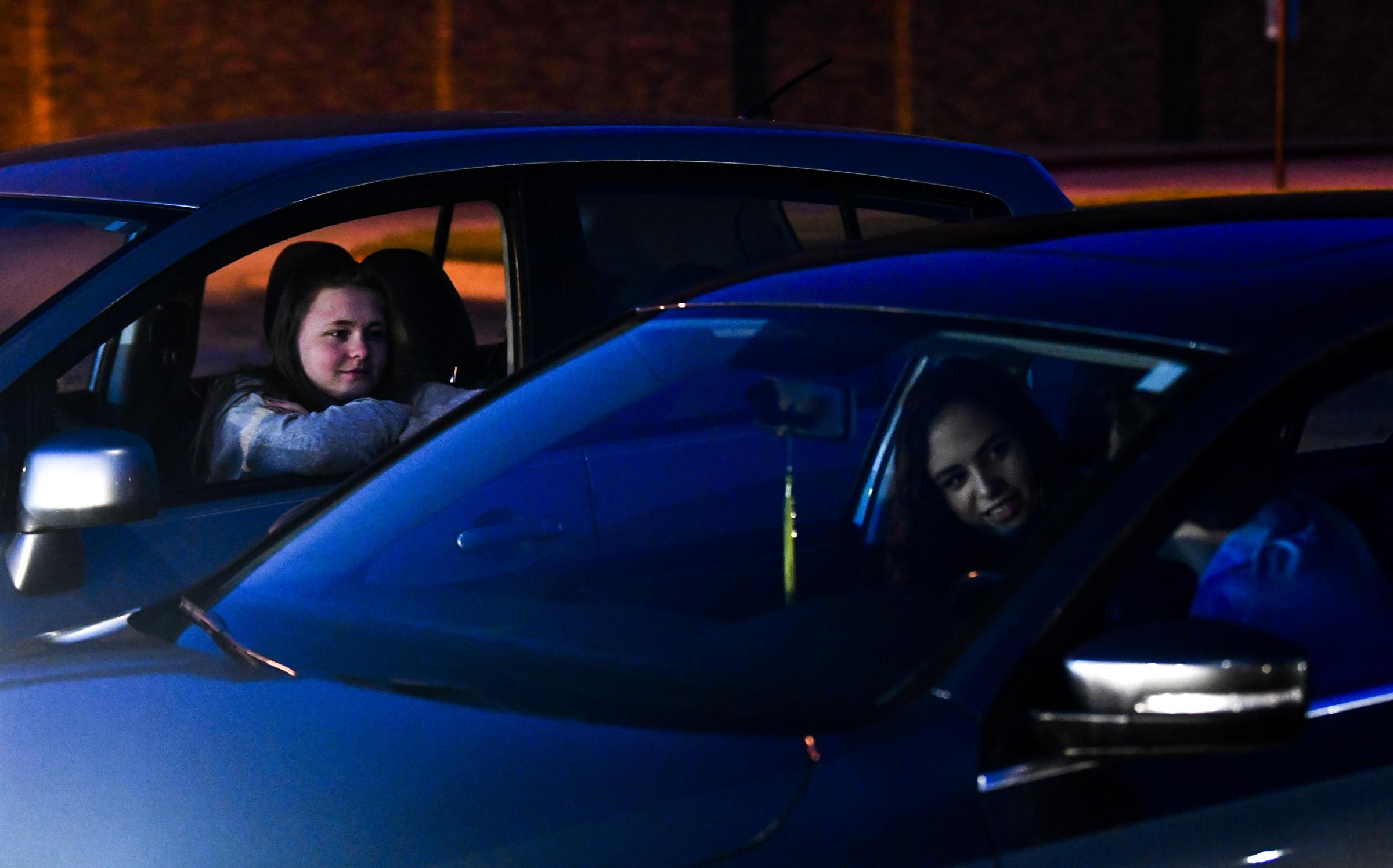 Rock Bridge seniors Madi Polnika, left, 18, Kennedy Robbins, center, 18, and Joseph Gard, right, 18, talk in the school parking lot on April 17, 2020 at Rock Bridge High School in Columbia, Missouri. The three talked about what was happening in their lives now that their year had been cut short due to the COVID-19 pandemic. 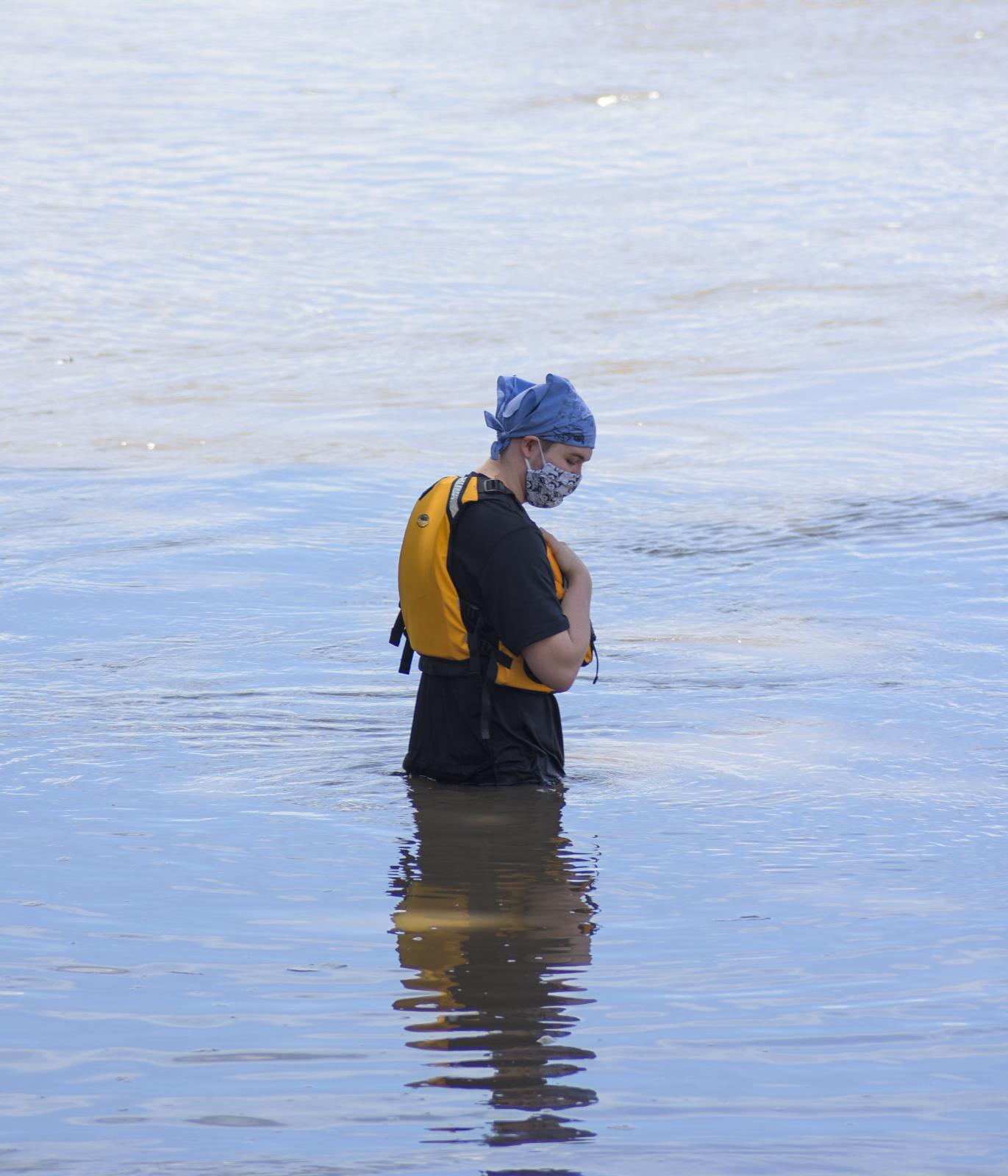 Volunteer Matthew Hall watches the ripples in the Missouri River as he waits for the boat racers to arrive on August 5, 2020, at Cooper’s Landing. Hall started volunteering for the Missouri River 340 race around five years ago. Hall’s grandfather used to compete in the race and Hall was planning on competing as well with a family friend. After the friend couldn’t compete tandem with him, Hall started to volunteer. 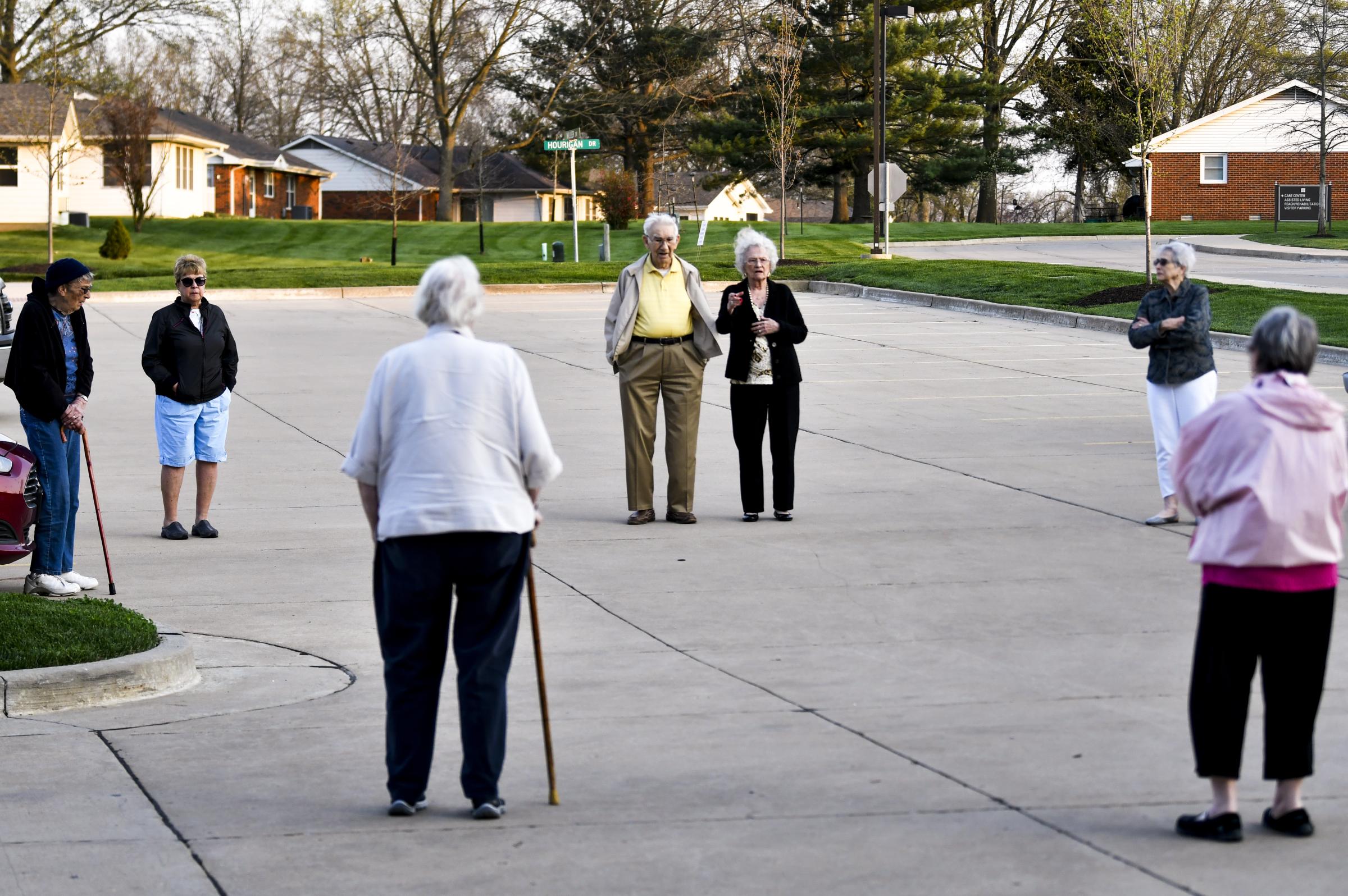 Residents of Lenoir Woods Retirement Community gather outside for a social distance prayer circle during Passover on April 8, 2020, in Columbia, Missouri. For two weeks leading up to Easter Sunday, the residents went outside every night for a prayer circle and to sing the Doxology. 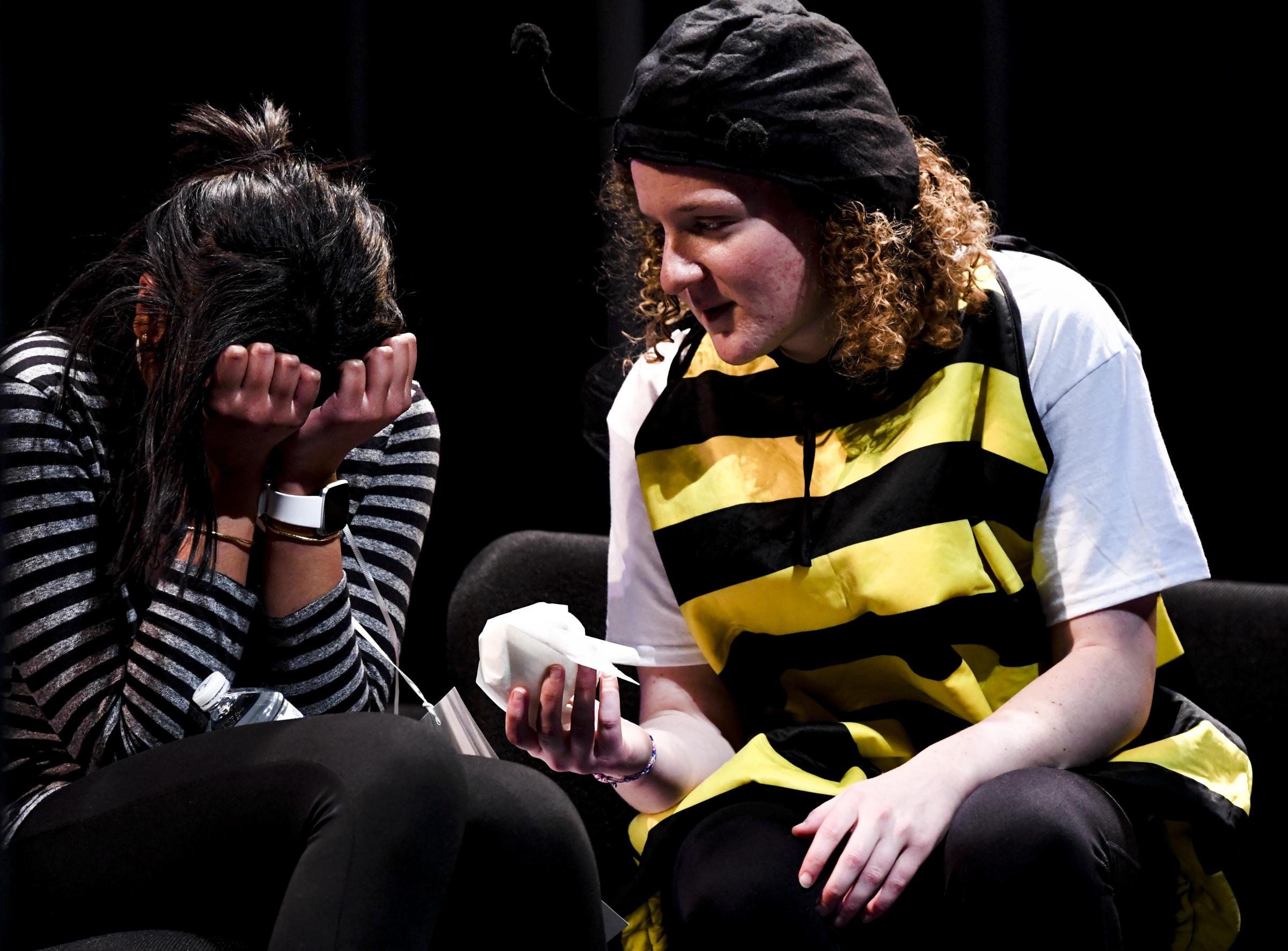 University of Missouri senior Ellen Goodrich, right, offers a tissue to Shreeyanka Bardhan on March 10, 2020, at Jesse Hall in Columbia, Missouri. Bardhan was the first to get out at the Missouri Regional Spelling Bee by misspelling the word ‘infant.’ 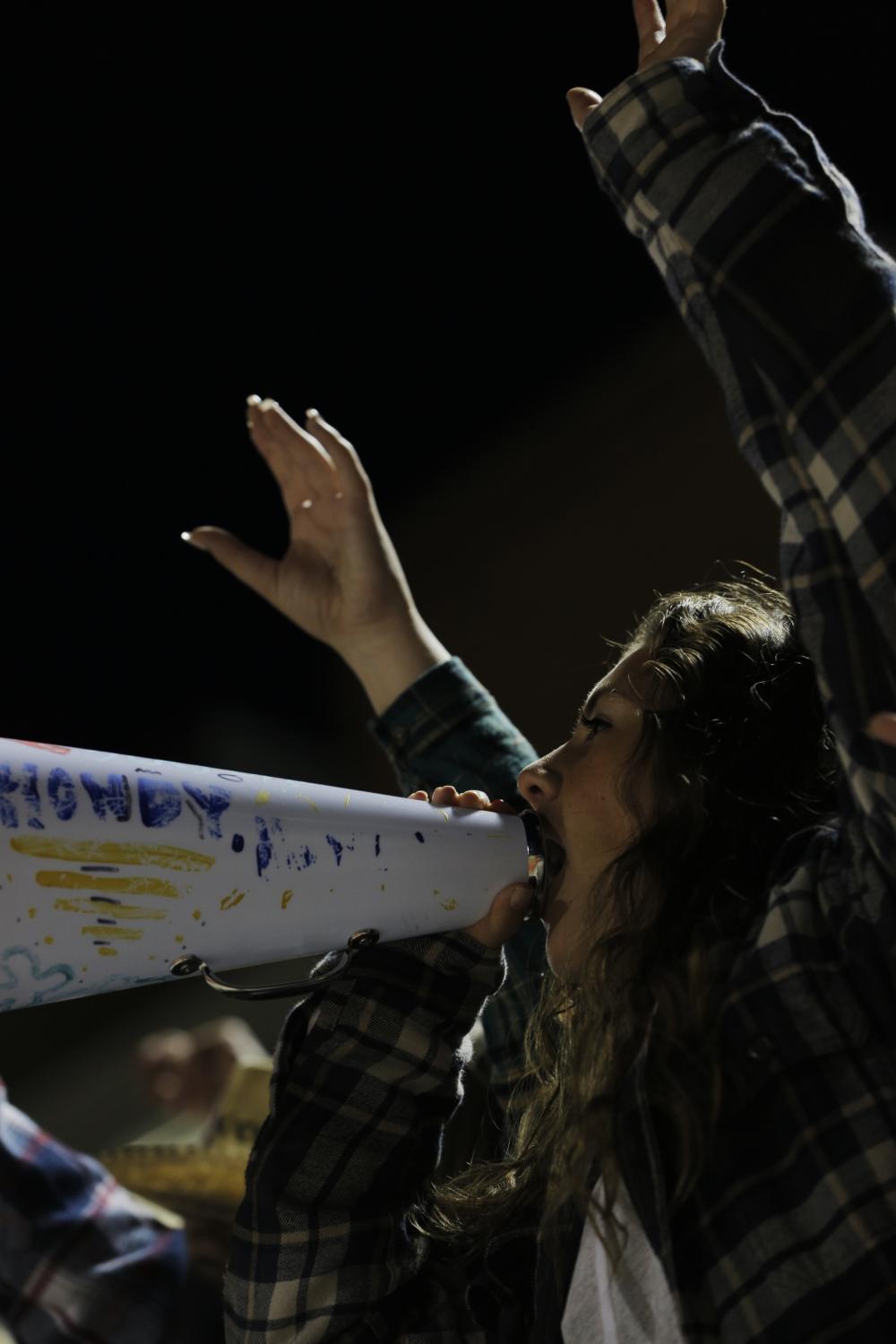 Helias Catholic High School senior Emily Knox screams into a megaphone as the Cavaliers flooded the field before the game on Oct. 16, 2020, in Jefferson City. "Howdy, howdy, let's get rowdy" was written on the megaphone as part of the 'Country Hick' game theme. 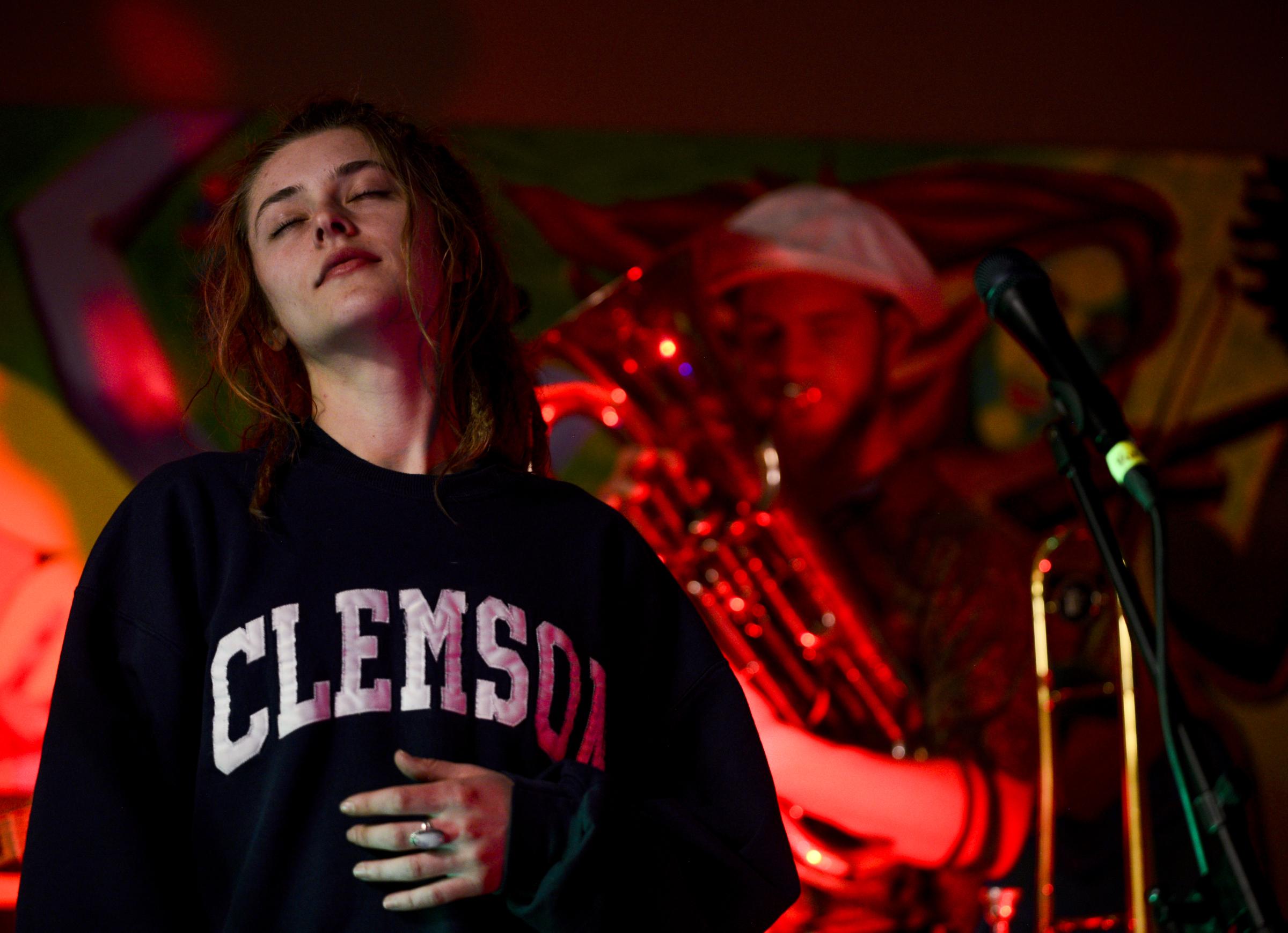 Madeline Wright dances to the music of her band, Catdaddy's Funky Fuzz-Bunker Band, on Wednesday, Feb. 19, 2020, at Wildy's World. Despite not having two members because of a birth, Catdaddy's came to perform to help owner Stacy "Wildy" Self raise money after her store flooded in January. 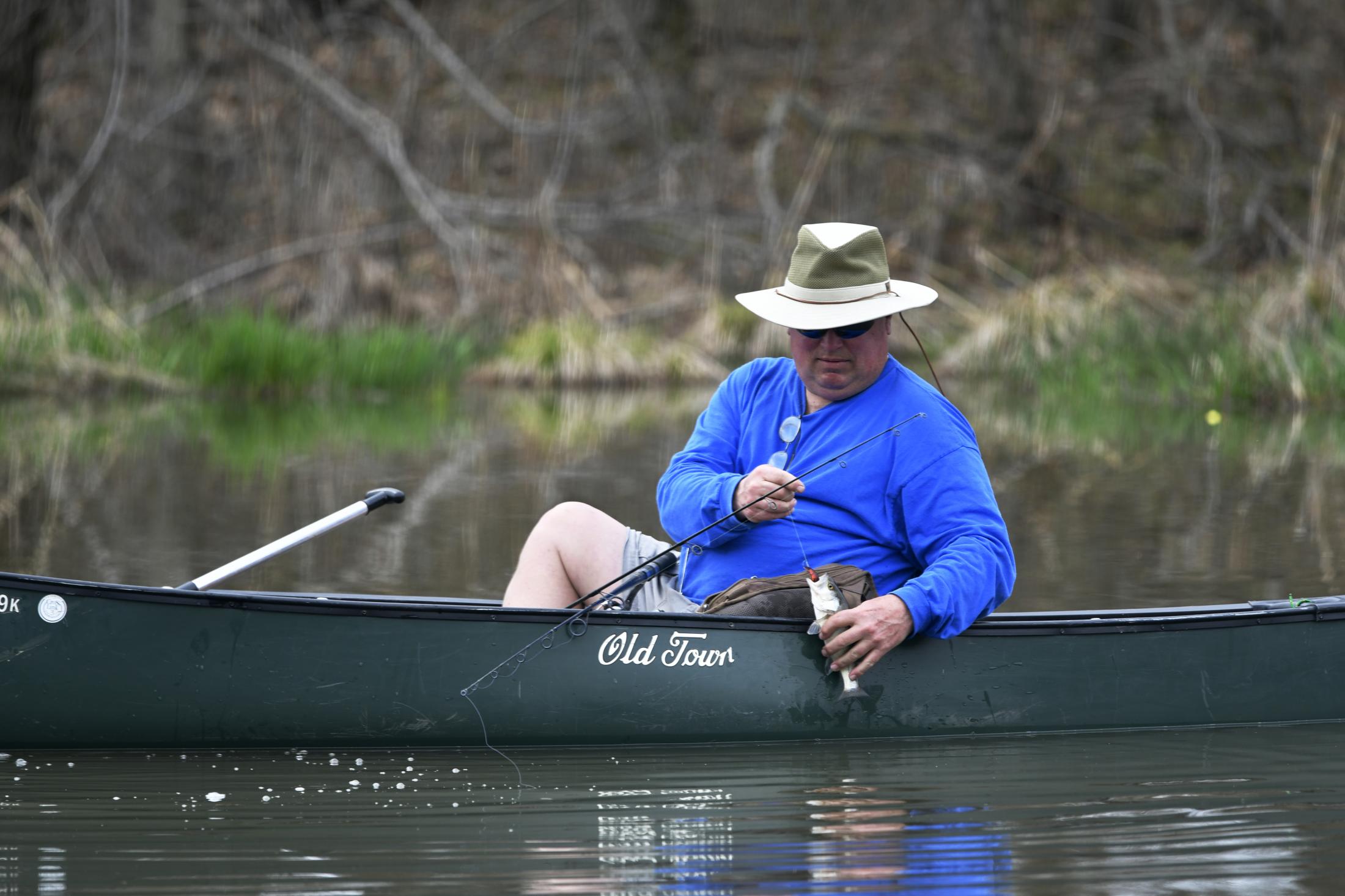 Nick fishes on March 27, 2020, at the Number 153 Reservoir in Boone County, Missouri. According to Nick, fishing was one of the easier activity to do during the COVID-19 pandemic since his boat allowed him to practice social distancing. 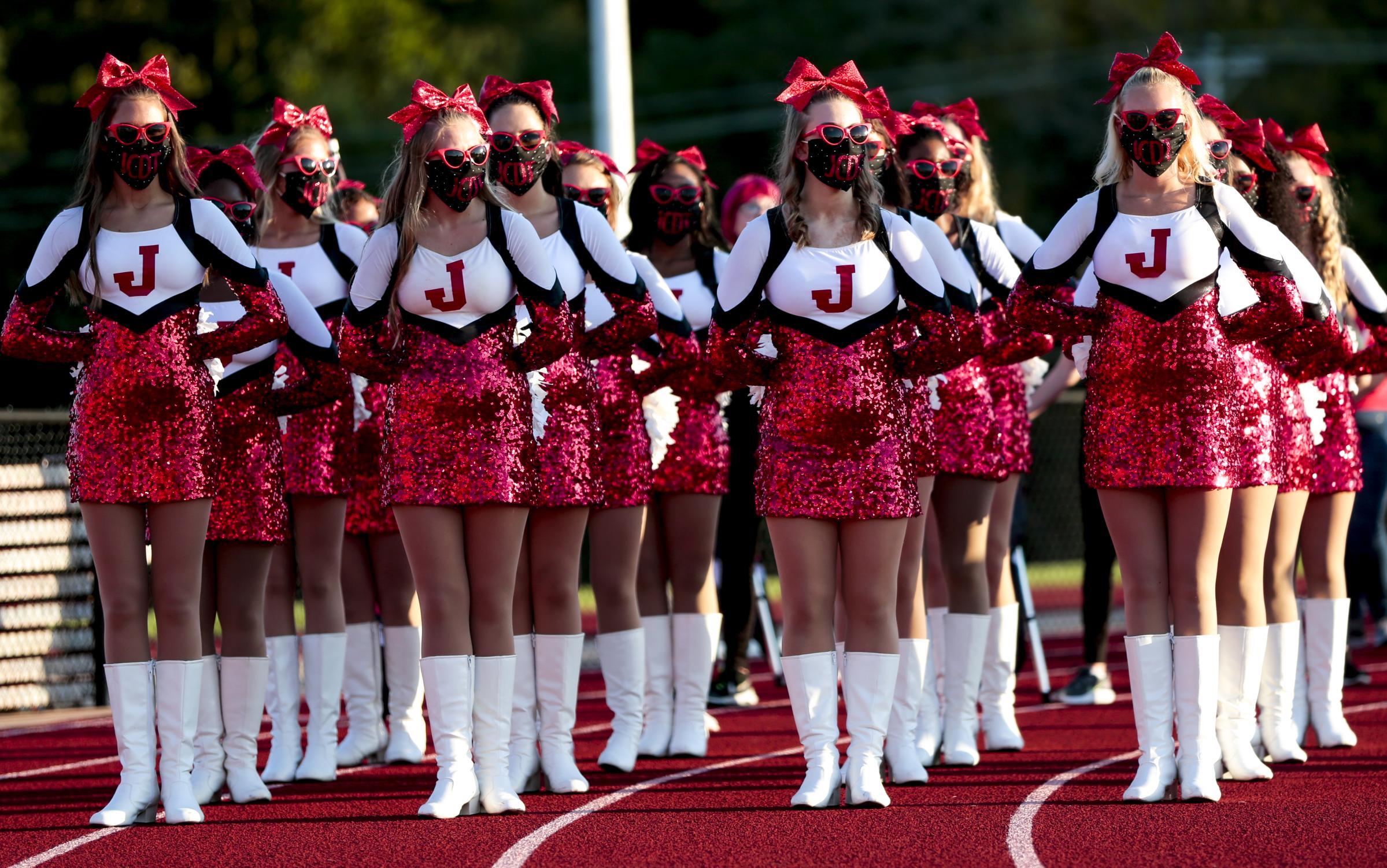 Jefferson City High School’s dance team waits to take the field on Friday, September 4, 2020, in Jefferson City. Due to the COVID-19 pandemic, the girls all wore masks when unable to be six feet apart. “It’s really weird because we’re usually so close and all together,” senior Katrina Peter said.

A young girl gazes over a sea of red at an empty street, waiting for the Kansas City Chiefs’ Super Bowl parade to start, on February 5, 2020, in Kansas City, Missouri. Her father placed her on top of his shoulders so she could clearly see the players as they paraded down Grand Blvd to Union Station. 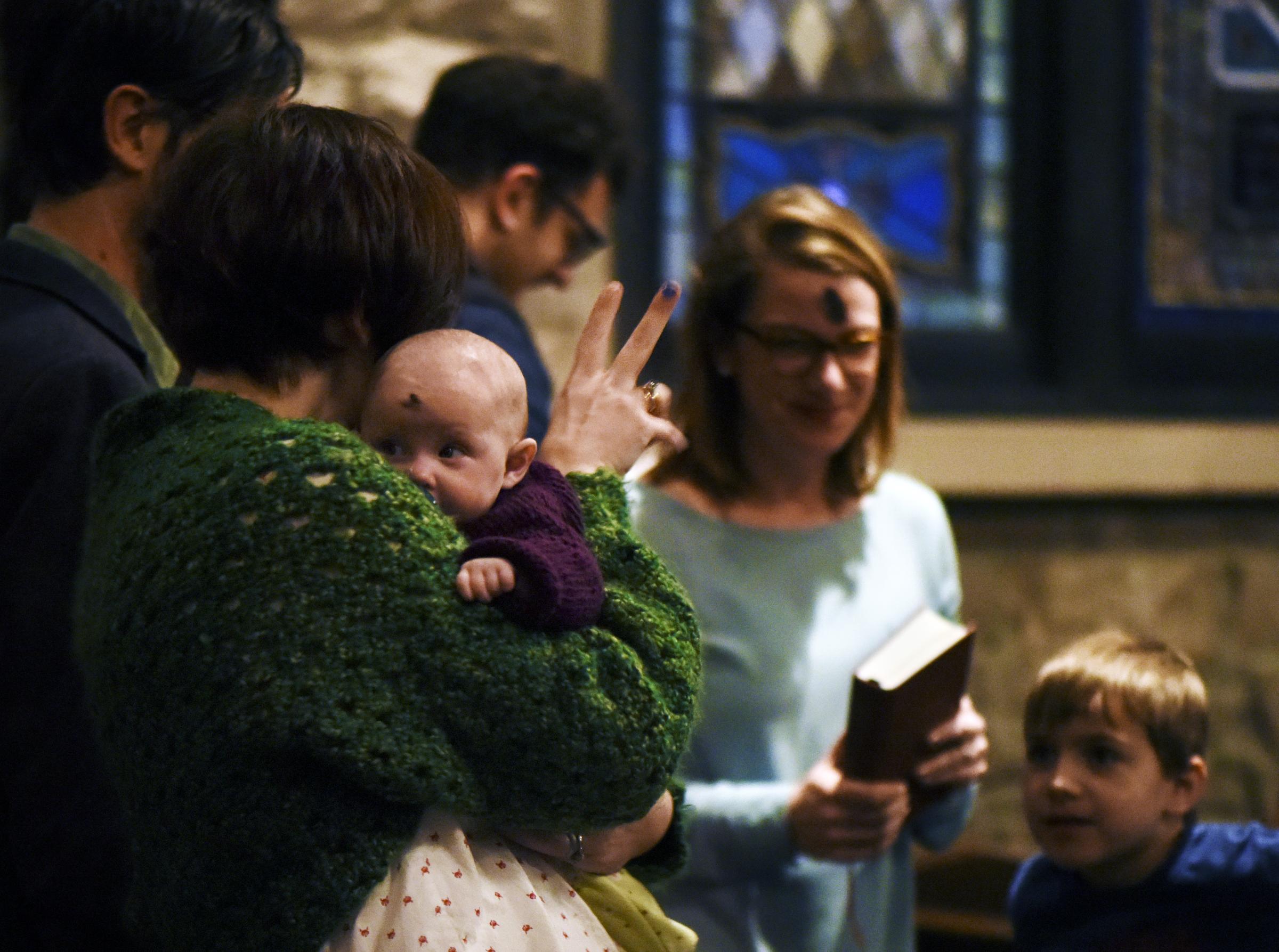 Morgan Owen passes the peace to other members of the congregation while holding her daughter, Hollis Owen, during the Ash Wednesday service on February 26, 2020, at Calvary Episcopal Church in Columbia, Missouri. Ash Wednesday signifies the beginning of Lent for some Christian denominations.

Elizabeth Underwood is a photographer and editor in Columbia, Mo. Her work focuses on the intersection of sports and community. She is available for assignment.