Past lifespan hinders adult care for people with Sickle Cell

Transitioning from pediatric to adult care can be hard enough without having your life depend on it.

The medical field is constantly working to increase the lifespan of patients with Sickle Cell. But with people living longer, a new need for adult hematologists specializing in the disease has increased.

Nyetta Dienagha is a resident of Columbia, Missouri, and has Sickle Cell Type SS. Her experience going from pediatric to adult care was difficult in the early 2000s.

“As a child, it wasn't bad. We had a set doctor and a set amount of nurses that, you know, were taking care of us. They knew us,” Dienagha said. “The hospital stays as I became an adult, it became harder and harder for me because then I was running into doctors that didn't know anything about Sickle Cell.”

Andre Harris, a student at Fayetteville State University in Fayetteville, North Carolina, believes that the lack of adult care practitioners that know about Sickle Cell is because most patients with the disease didn’t live past pediatrics in the past.

Quality of transitional care was further explored by a 2018 study conducted for the Blood Journal, which stated that “the majority of SCD-related deaths occur after 18 years of age and after transfer to an adult provider.” The study concluded that there is an “urgent need of improved protocols and systems in order to provide continuity and quality care during these critical transition years.”

Kevin Wake is the president of the Uriel E. Owens Sickle Cell Disease Association of the Midwest in Kansas City, Kansas, and has Sickle Cell Thalassemia. He works with hospitals and residents in the city and sees these issues first hand.

“There really isn't a good transition program that is in place for patients when they transition from pediatric care to adult care. And so because of that, I think patients living with this disease aren't managing the disease as best they could,” Wake said.

To fix these problems, many departments and publications have been studying the effects of transitional programs.

Another 2018 study for the Blood Journal explored the use of the support group model from the Centering Healthcare Institute. The study stated that the “Centering-based group care model appears to offer a promising strategy to increase health education and will facilitate a successful transition from pediatric to adult care.”

Dr. Michael Trendle, a hematologist and medical oncologist at the Ellis Fischel Cancer Center in Columbia, Missouri, agrees with the implementation of such programs to provide “social support.”

The only prominent Sickle Cell group that provides support meetings in Missouri is the Sickle Cell Association in St. Louis, founded in 2011.

Despite the prevalence of studies on transitional support for people with Sickle Cell Disease, the implementation of their solutions is something that hasn’t happened as quickly and prominently as patients feel they need. 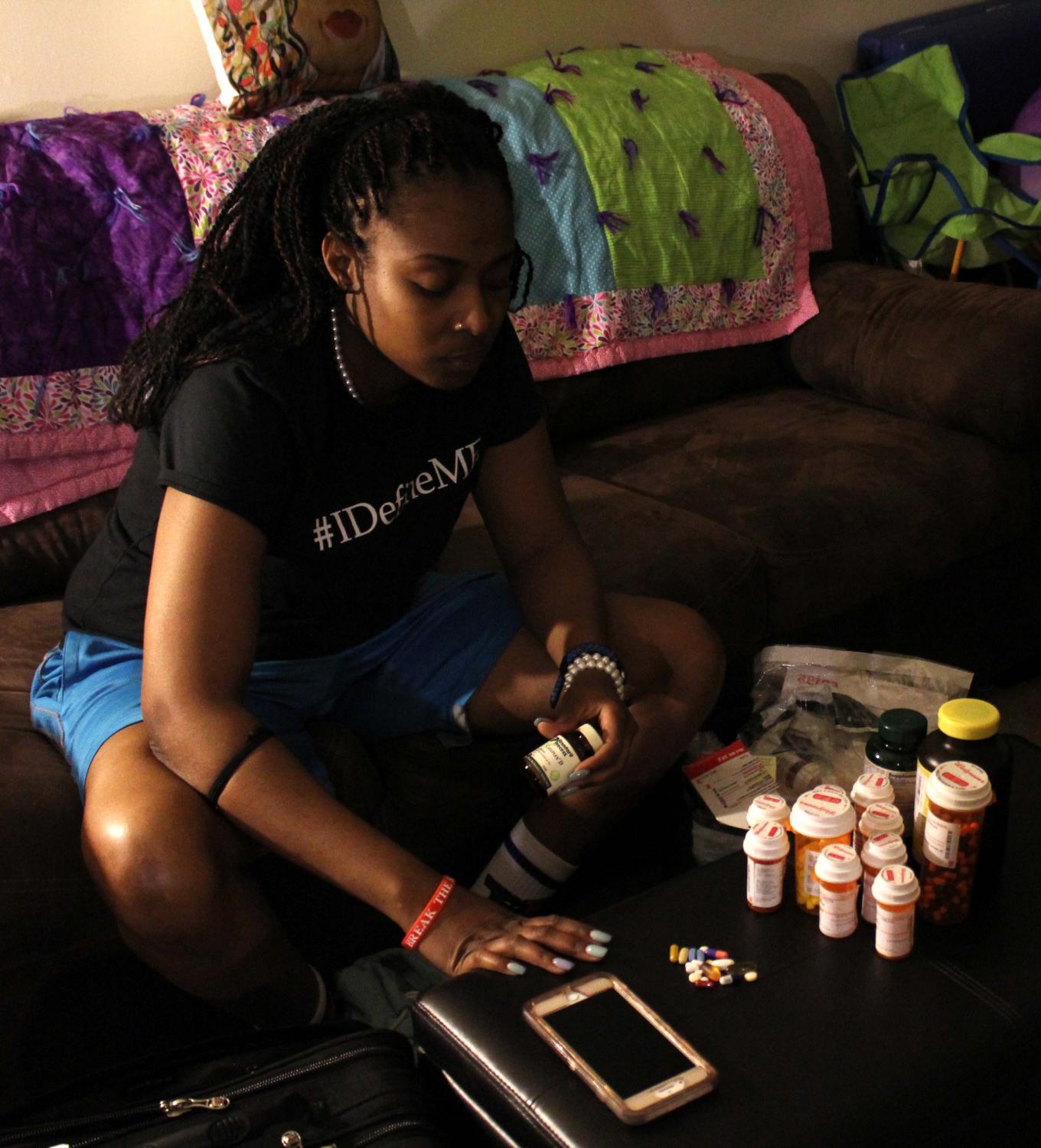 Ronicia Otey, a 28-year-old graduate student at Lincoln University in Jefferson City, Missouri, with Sickle Cell Disease Type SS, lays out her nightly medication on April 7, 2019, at her apartment in Saint Louis. Sickle Cell Type SS is where a person’s body produces more sickle-shaped red blood cells than regular ones, causing chronic pain. As part of her treatment, Otey had to take 22 different pills before going to bed every night, not including the ones for pain management. 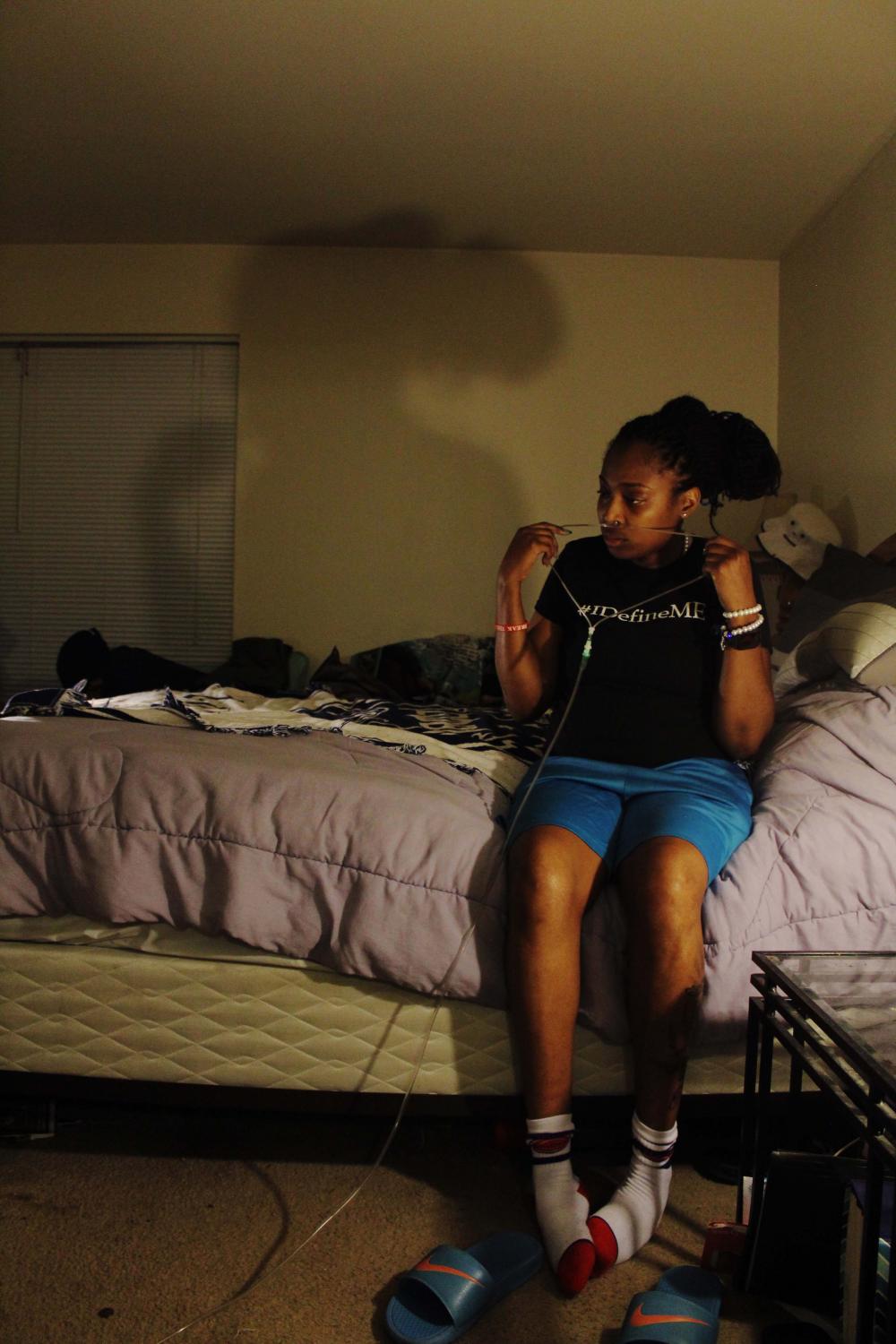 Ronicia Otey, a 28-year-old graduate student at Lincoln University in Jefferson City, Missouri, with Sickle Cell Disease Type SS, puts on her oxygen mask before going to bed on April 7, 2019, in her apartment in Saint Louis. Otey had to wear the mask at night to help with her Acute Chest Syndrome. Many patients, such as Otey, experienced complications from Sickle Cell Disease such as this.

Elizabeth Underwood is a photographer and editor in Columbia, Mo. Her work focuses on the intersection of sports and community. She is available for assignment.