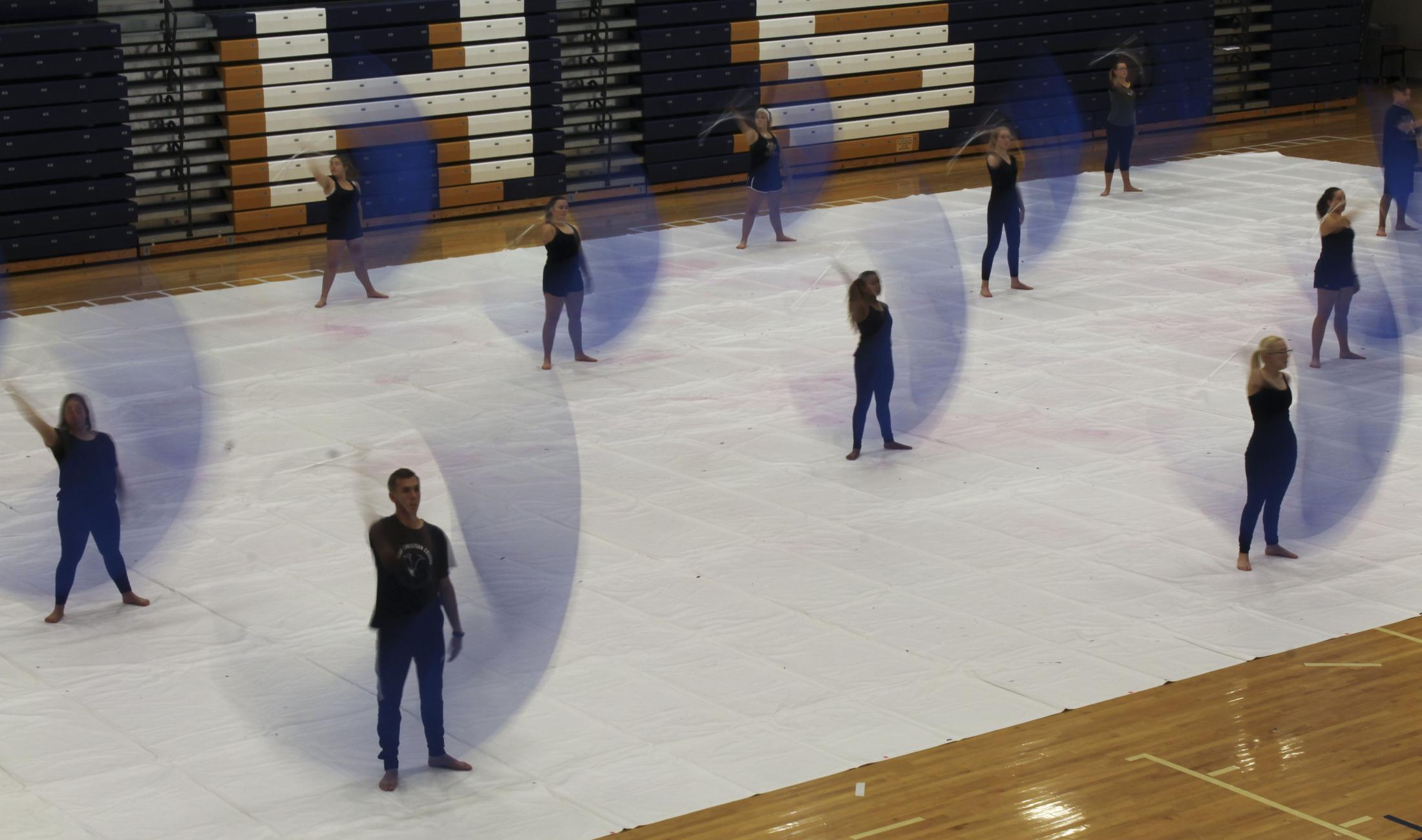 1 / 9
Members of MU’s winter guard team warm up at their first rehearsal with the design coaches on November 23, 2019, in the gym of Battle High School in Columbia, Missouri. At this practice, members of Ionic Independent learned the theme of their show and started to block segments.
Starting in the winter of 2017, MU joined a new sport through the formation of the Ionic Independent winter guard team. On March 30, the guard finished fourth at the 2019 Mid Continent Color Guard Association Championship competition.

To prepare for the upcoming competition on Jan. 25, Missouri’s winter guard team began meeting in the middle of September. Weekend practices began in November, starting at 6 p.m. Fridays and continuing until 2:30 Saturday morning before resting for a few hours and getting back to work.

The team is not restricted to students at MU. Many students at schools in the area who want to compete in winter guard travel to Columbia to work with Ionic.

The work that members do at practice goes beyond counting and technique, though. “In color guard there are two types of skills: emotional and technical,” design coach Zachary Barber said. During its weekends together, the team works on honing these two aspects of performance. 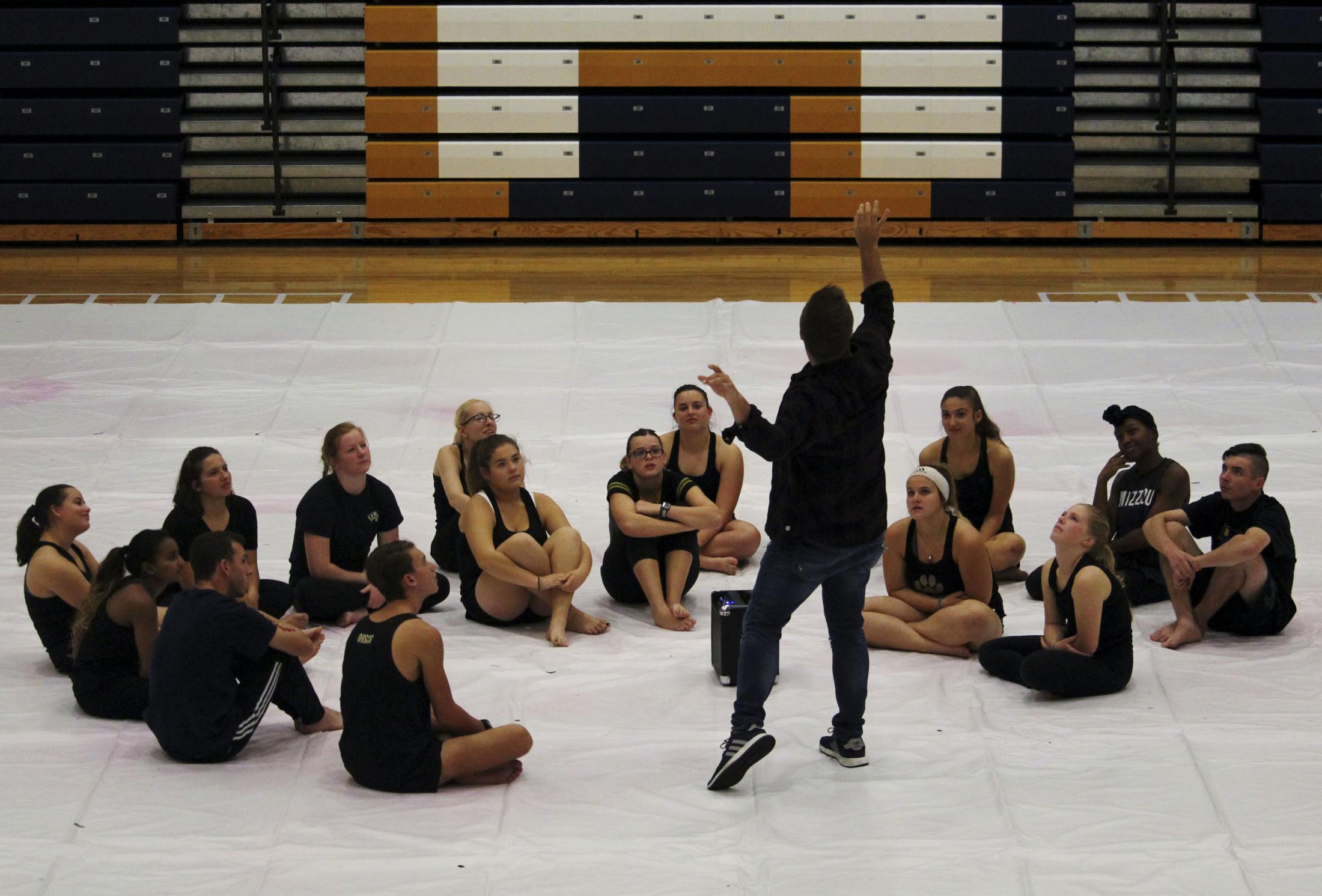 3 / 9
Zachary Barber, design coach for Ionic Independent, demonstrates his vision for its 2020 show during the first meeting November 1, 2020, at Battle High School in Columbia, Missouri. On this day, members also learned that their show would be titled ‘The Artistry of Motif’ and follows the ideas of motifs and synchronicity in visuals, attitudes and routine. Barber discussed how he also wanted to follow the “motif” of the team where each year the show is something simple but unique to the team members of that season. 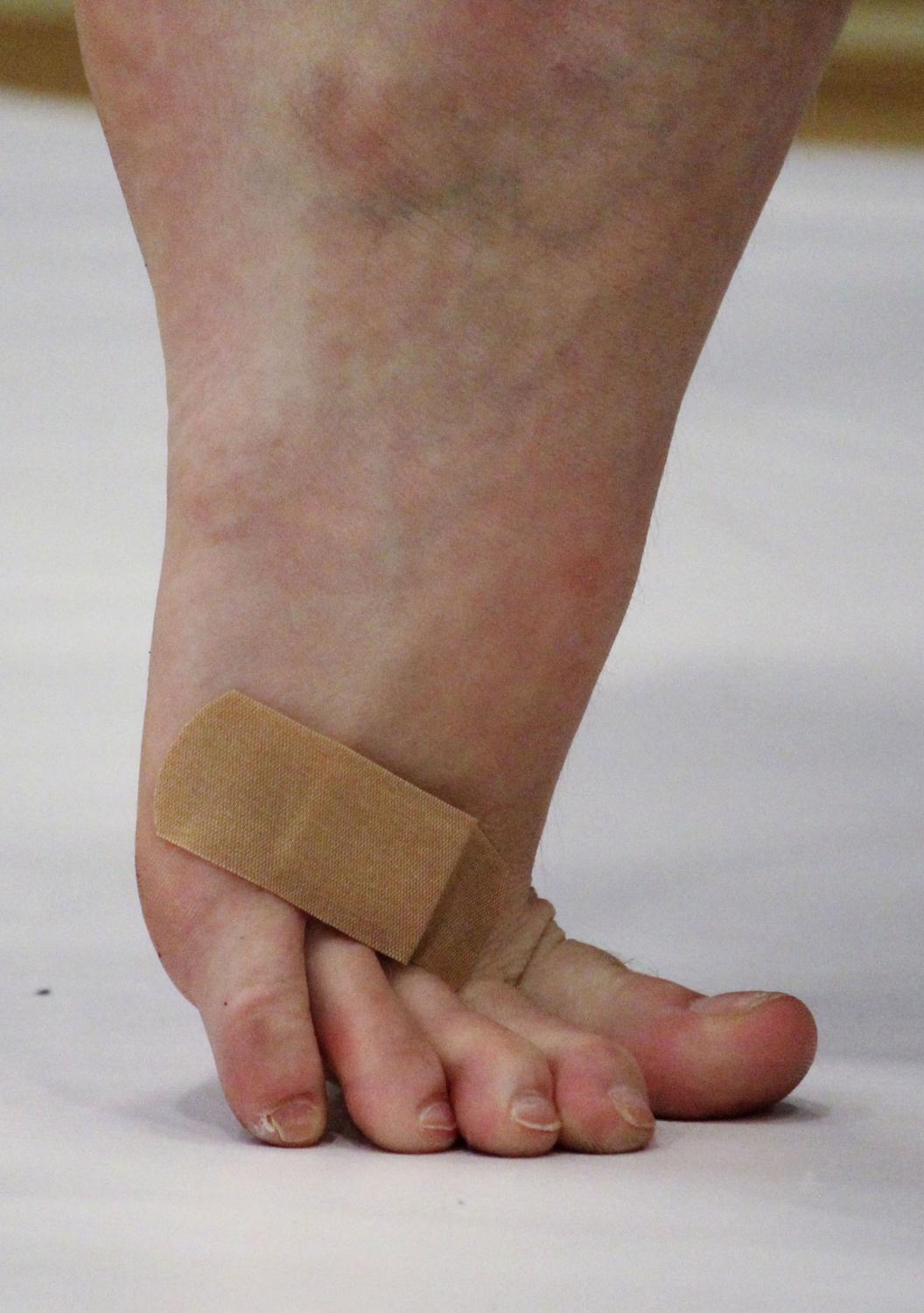 4 / 9
Stephens College freshman Lauren Buzzell returns to tendu, a ballet position, after applying a bandage November 3, 2019, at Battle High School in Columbia, Missouri. Buzzell had been tossing a flag, which landed on her foot, breaking the skin. She quickly ran off to apply a bandage before returning to the floor to continue the practice without disturbing anyone. Part of being a team in the guard is rushing through mending injuries so that there is no chance of desynchronization. “We all have to be together” is a motto both the coaches and the teammates call out during practice. 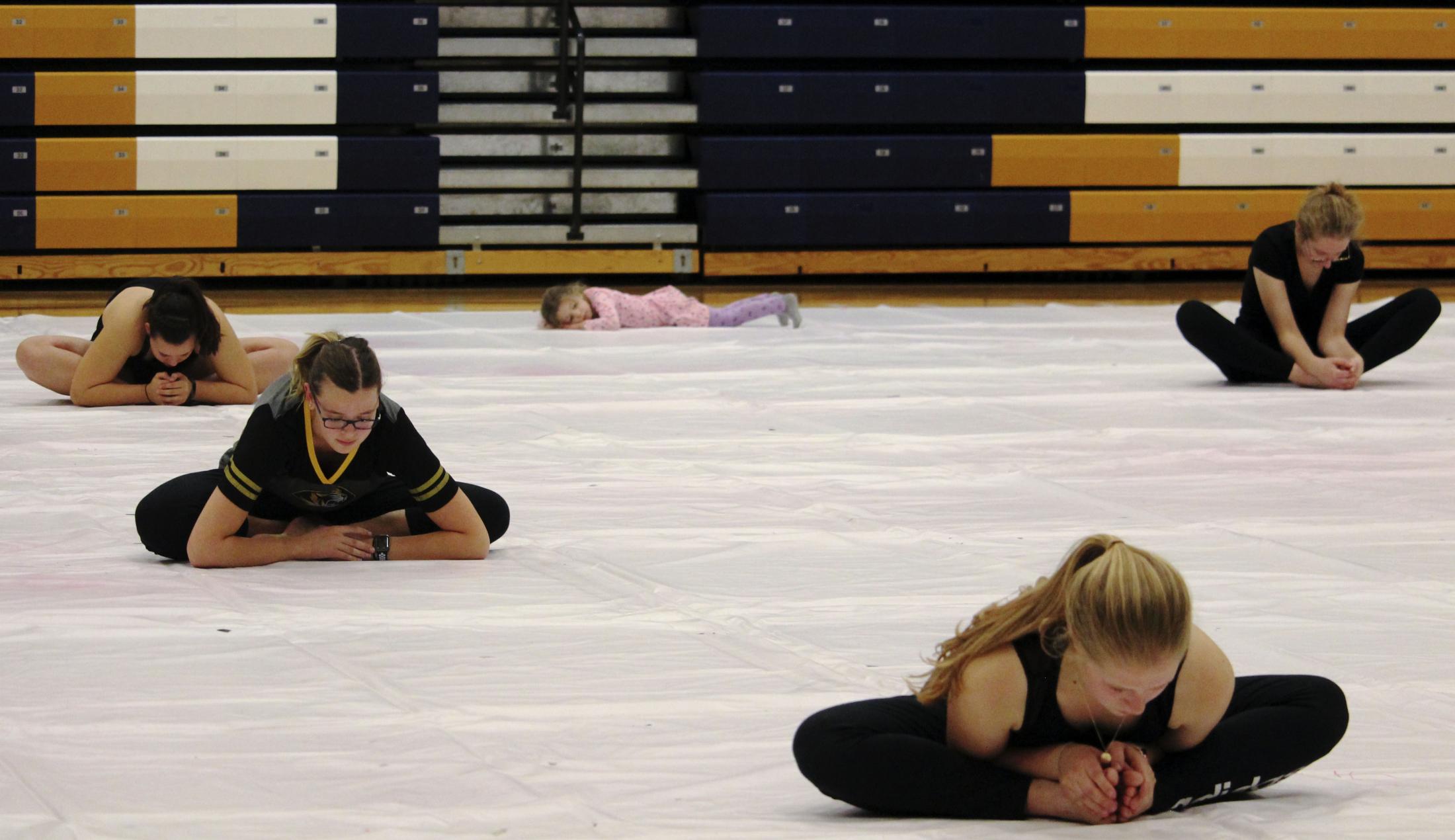 5 / 9
Members of the Ionic Independent winter guard stretch on their practice mat before picking up equipment November 1, 2020, at Battle High School in Columbia, Missouri. This day, the routine, uniforms and other details were revealed. In the back, coach Christina Thalhuber’s daughter lay down to join the stretches. Before the kids’ bedtime, Thalhuber’s husband brought them to the school to see their mom and watch the guard. 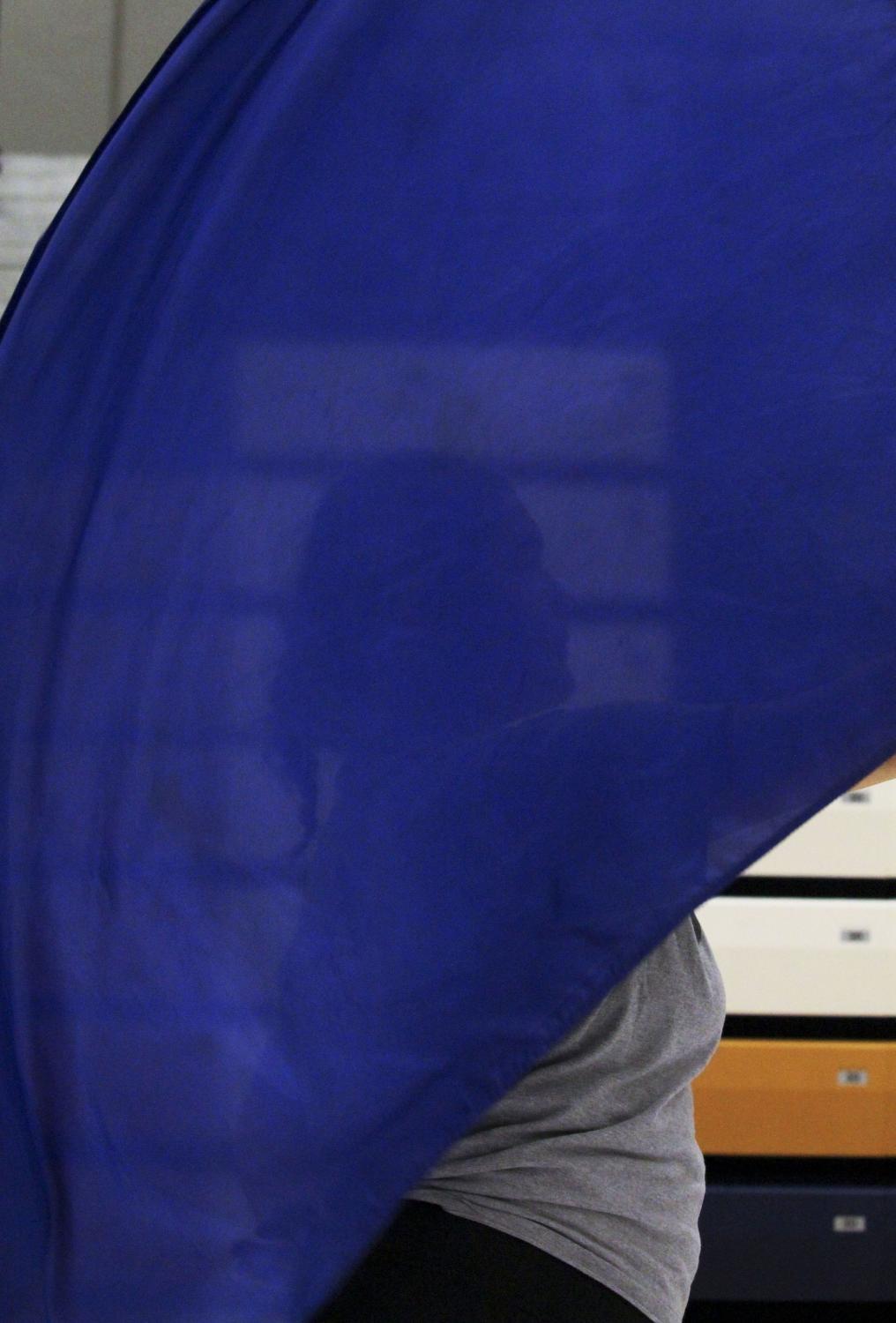 6 / 9
Oakville High School senior Helen Tolcou works on her windmills on November 3, 2019, in the gym of Battle High School in Columbia, Missouri. Tolcou came to Columbia to fill in for missing team members so Ionic Winter Guard could begin blocking their show. 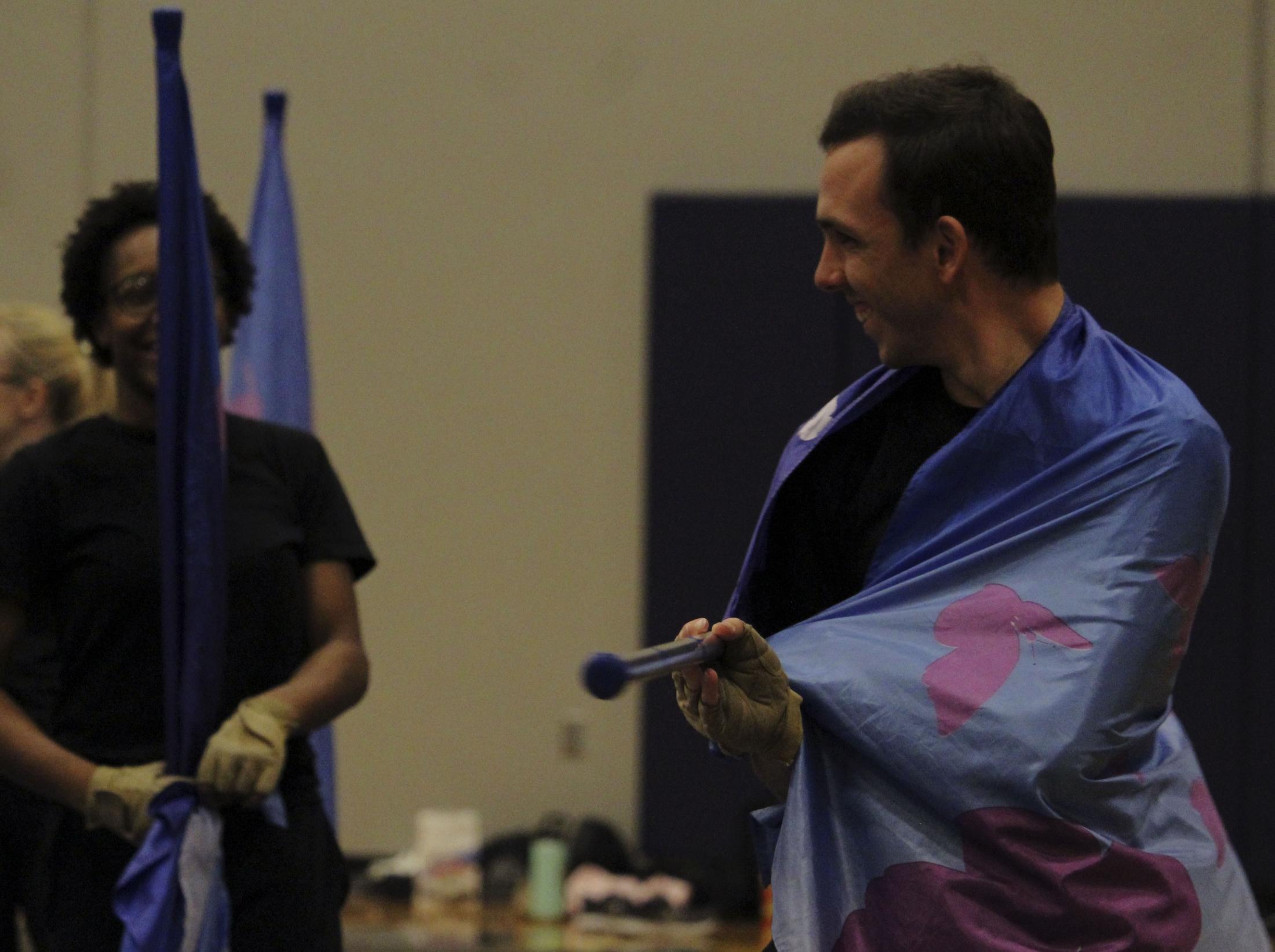 7 / 9
Karson Green wraps his practice flag around him during a break on December 8, 2019, at Battle High School in Columbia, Missouri. During the team’s water break, Green and other members joked around and wore the silks of their flags as different clothing articles. “Karson’s modeling our shawl,” team captain Jazmyne Tyler announced to the team. 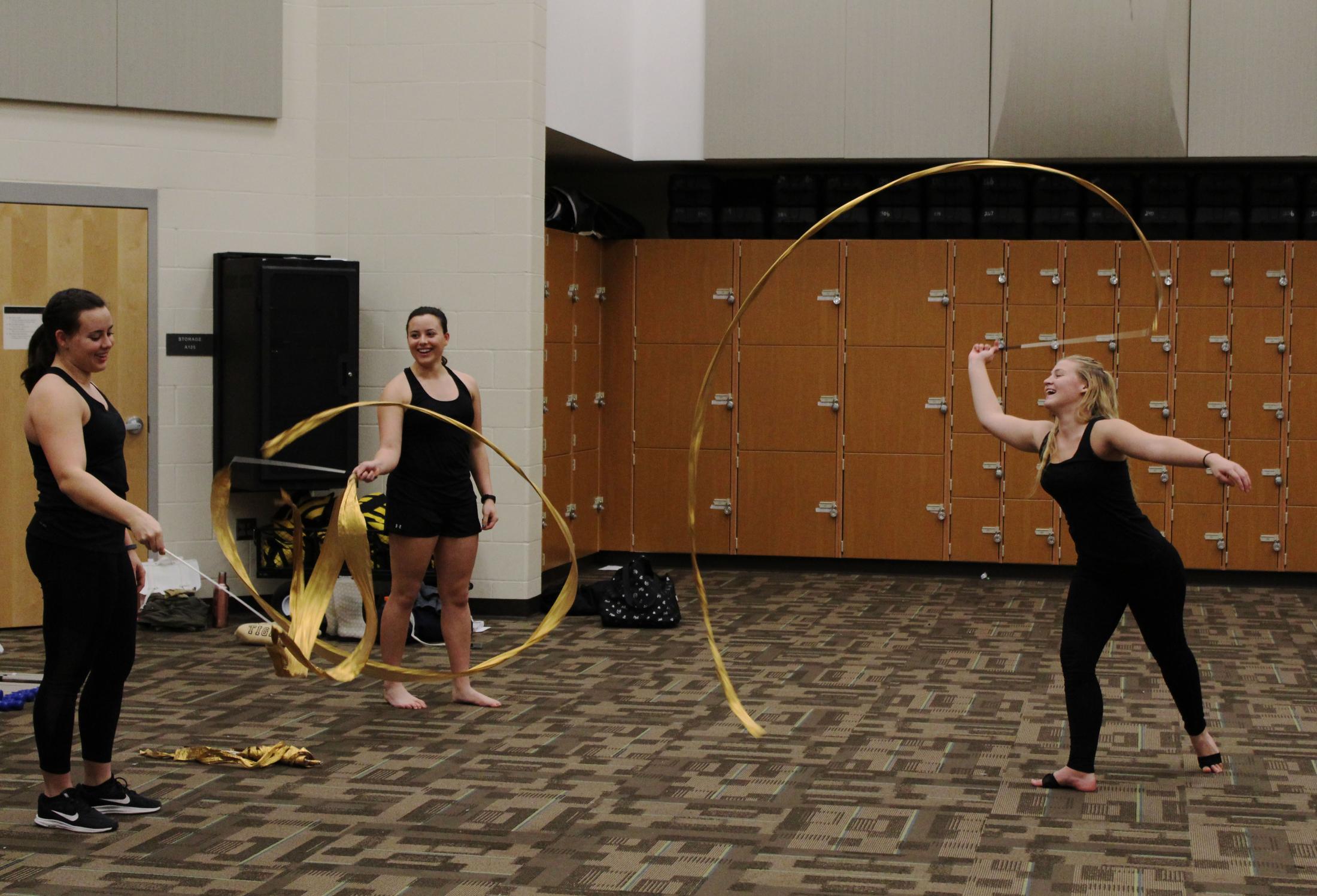 8 / 9
MU freshman members Erin and Alison Clay twirl ribbons with University of Central Missouri senior Taylor Broleman on December 20, 2020, in the band room of Battle High School in Columbia, Missouri. Although Ionic Independent is part of MU, members of color guards around the area are allowed to audition and join the winter guard team as long as they meet the age requirements. 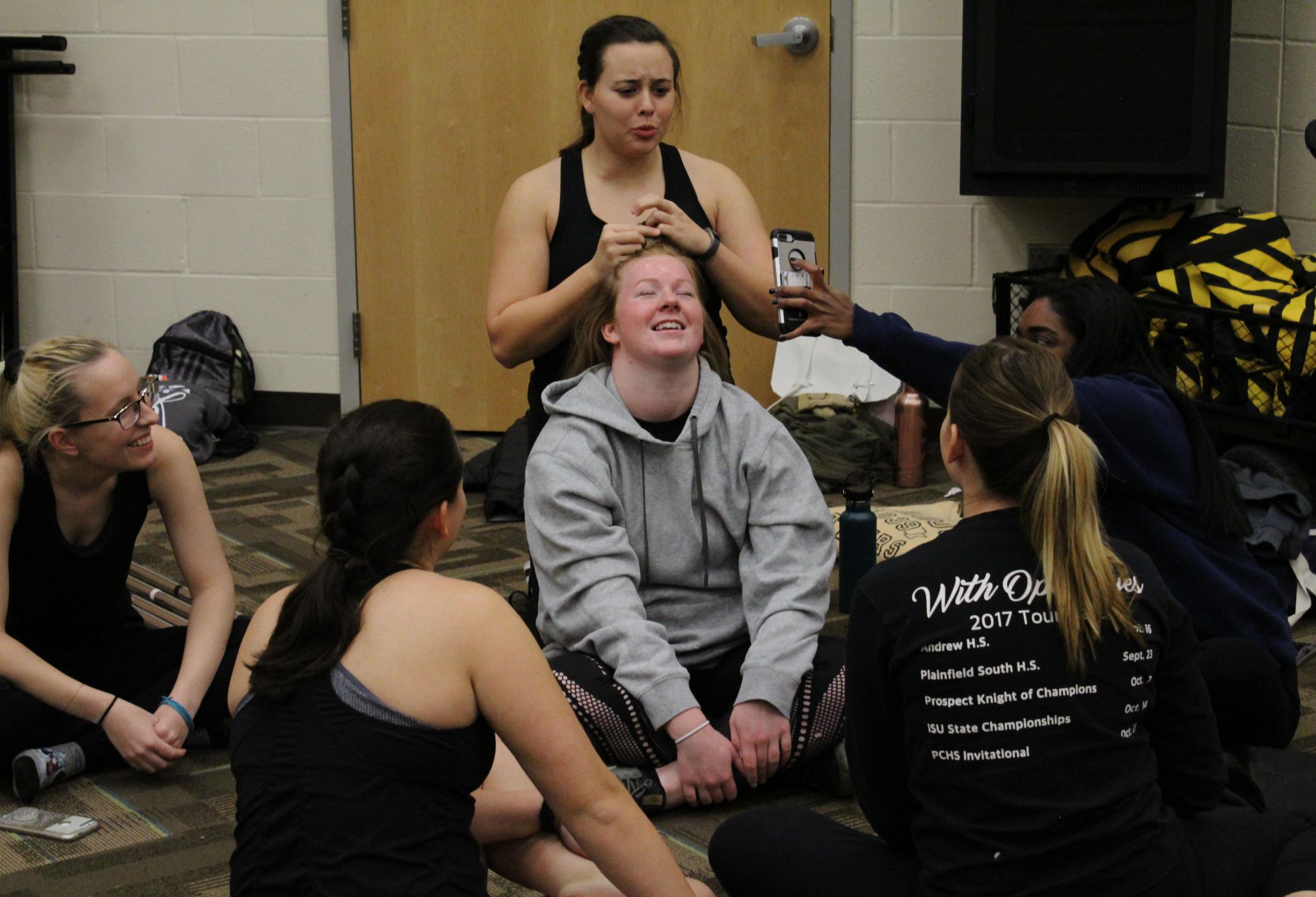 9 / 9
Erin Clay, MU freshman, braids Kiersten Hart's hair before Ionic Independent's practice Dec. 20 in the band room at Battle High School. One of the rules coach Christina Thalhuber has with the team is, "If you're early, you're on time and if you're on time, you're late." Members of the winter guard then arrive at the school early and hang out before their practice starts.

Starting in the winter of 2017, MU joined a new sport through the formation of the Ionic Independent winter guard team. On March 30, the guard finished fourth at the 2019 Mid Continent Color Guard Association Championship competition. To prepare for the up...

Elizabeth Underwood is a visual journalist in Missouri. Her work focuses on local sporting events and the Columbia community.